Formerly thought only to occur at Verloren Valei, it now seems as though this butterfly is more widely dispersed.

Serradinga clarki amissivallis, previously known as Clark’s Lost Widow and now renamed the Verloren Valei Bronze Speckled Widow, was previously thought be a Verloren Valei “special”—that is to say, only found on the reserve. However, Frans Krige, Regional Ecologist for Mpumalanga Tourism and Parks has found it elsewhere. On 10 November, during the course of a Wetland Rehabilitation survey at Middelpunt (between Dullstroom and Belfast), Frans found a new locality for Gladiolus malvenus and many Serradinga, which are currently presumed to be the Verloren Valei Bronze Speckled Widow.

“This butterfly has previously only been recorded from Verloren Valei, so this is an important finding,” says Jeremy Dobson, Chairman of LepSoc Africa.

See our previous article on this butterfly. 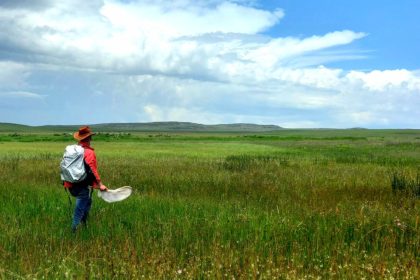