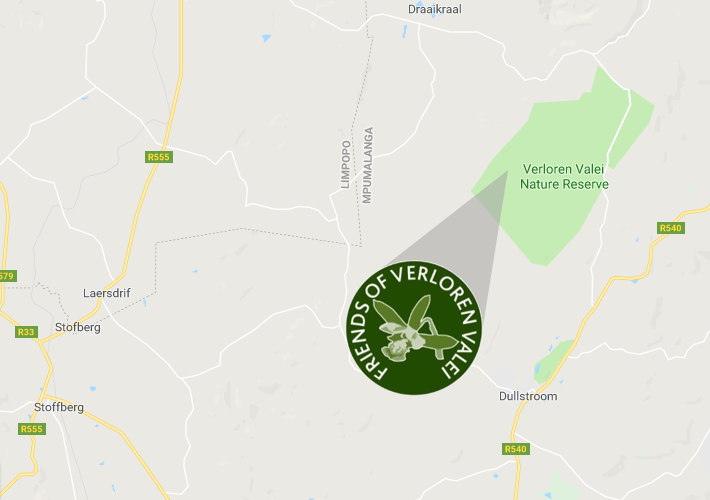 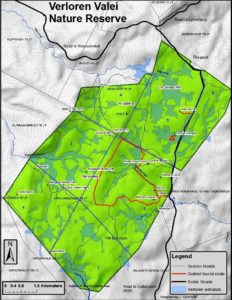 Verloren Valei is a closed reserve situated on the Steenkampsberg Plateau near Dullstroom in Mpumalanga, South Africa. It is an area of outstanding natural beauty aside from its ecological importance.

The two farms, Verloren Valei and Wanhoop, were bought with the help of the WWF and the Rupert Family and the 6055 ha reserve was proclaimed in 1983. In 2003 the Verloren Valei wetland system of approximately 850 ha of wetland was declared a Ramsar site. The Ramsar site boundaries correspond with the boundaries of the reserve.

(The United Nations’ Ramsar Convention was signed at Ramsar in Iran in 1971. It is an intergovernmental treaty that provides the framework for the conservation and wise use of wetlands. Since it came into force in 1975, almost 90 percent of United Nations members have acceded to it.)

It spans the watershed of the Olifants and Crocodile River catchment basins. By acting as sponges that store water during the rainy season, Verloren Valei’s wetlands play a critical role in reducing floods and in ensuring a steady flow of water during the dry season.

Four rivers rise in the Reserve: the Crocodile and Lunsklip which ultimately meet, and the Klipbankspruit and Klip Rivers, which both feed into the Olifants catchment basin.

South Africa is a water-scarce country, and healthy wetlands are vital to ensuring our water security. This means preserving the fragile web of ecosystems that make up the wetland environment, and protecting them from disturbance as much as possible. That is why the reserve is a closed one—it’s just too important and delicate to sustain unmonitored use by the public.

Verloren Valei is a provincial nature reserve managed by the Mpumalanga Tourism and Parks Agency (MTPA).

The grasslands consist of mainly so-called sour grass. This means that the grasses draw the nutrients down into the roots towards late summer and the grasses then have very little nutritional value. With these drawn down reserves the grasses are able to sprout very quickly in spring, especially after a fire. They then also have great nutritional value to grazing animals.

Although these areas are referred to as grassland, the veld also contains a large number of other plants and forage herbs. Verloren Valei itself is very rich in plant diversity ranging from aloes and arums to proteas and orchids.

The wetlands of Verloren Valei are in a near-pristine state and include good examples of a natural wetland characteristic of the Steenkampsberg Plateau.

Verloren Valei is particularly rich in orchid species. Only terrestrial orchids are present as the very cold winters do not permit any signficant numbers of trees and epiphytes to grow there. About 55 species of orchids in 11 genera have been recorded in the reserve. Some of the species occur in large colonies. The conservation status of this area has helped in increasing the number of colonies as well as the number of plants in a colony. New species are discovered nearly every year even though the survey was already started in 1989. Certain areas have not yet been properly surveyed due to inaccessibility.

One or two species of orchids start flowering at the end of September. Different species flower at different times right from September right up to the end of April. The peak flowering time is from the end of December to the beginning February.

Flowers of Verloren Valei: Field guide to the orchids and selected flowers of Verloren Valei Nature Reserve by Gerrit van Ede is on sale for R200. To order a copy, please contact info@verlorenvalei.org.za. Copies are also on sale at the Reserve office, as well as at the Heritage Centre and bookshop and various other outlets in the village of Dullstroom. 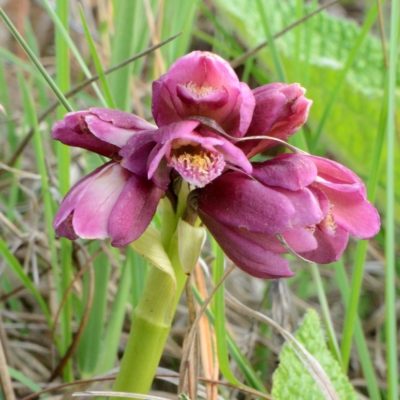 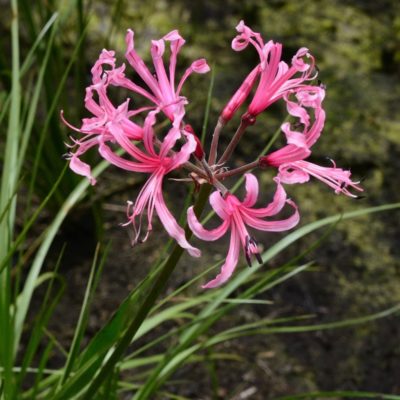 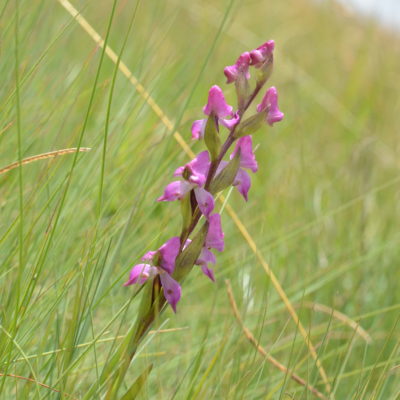 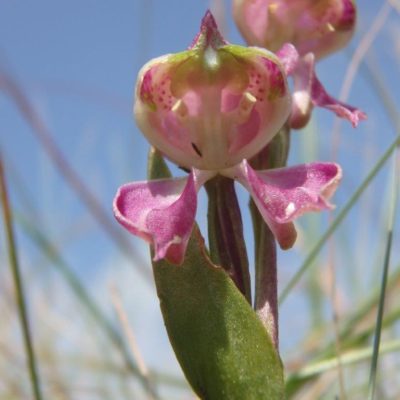 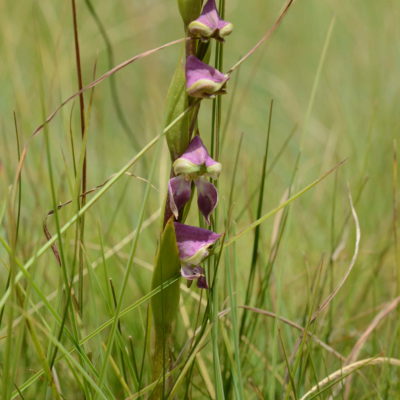 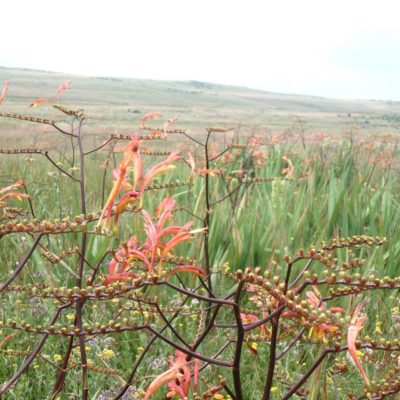 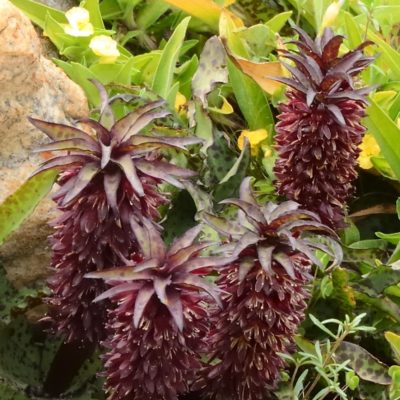 Articles on individual flowers may be found in our blog archive. Please use the tags or categories function to search for articles.

The extremely rare White-winged Flufftail and Rudd’s Lark have both been sighted on the Reserve.

Oribi, grey rhebuck, blesbuck and black wildebeest all roam the Reserve. Ongoing research by Dr Lourens Swanepoel of the University of Venda is demonstrating that a surprisingly large population of small carnivores also use the Reserve at night. These include the serval, the Cape Fox, the Black-backed Jackal, the Side-Striped Jackal, the African wildcat and the caracal. 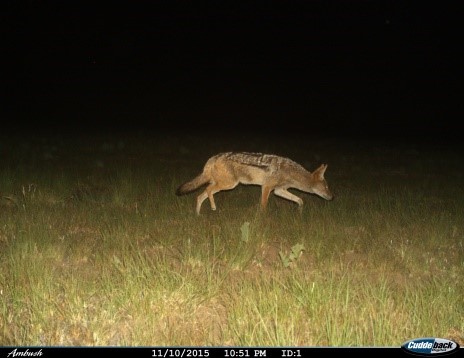 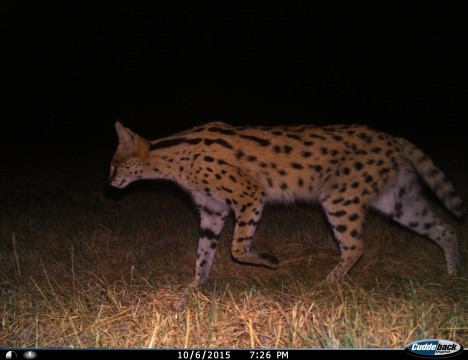 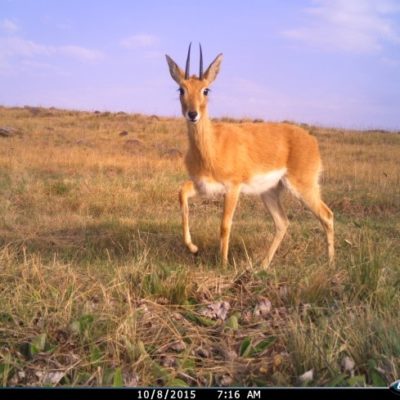 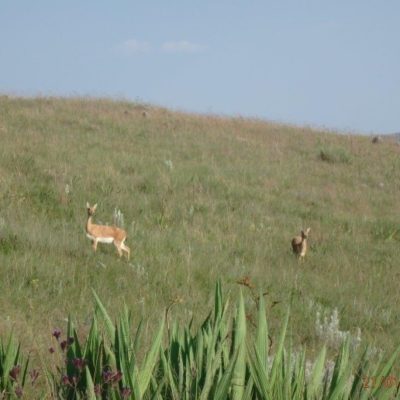 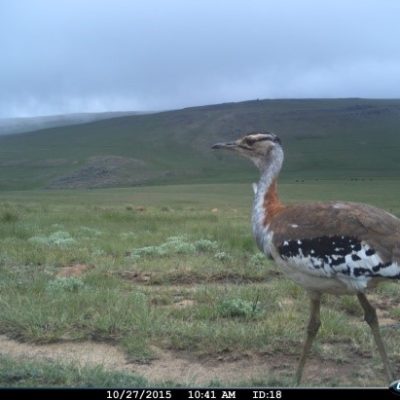 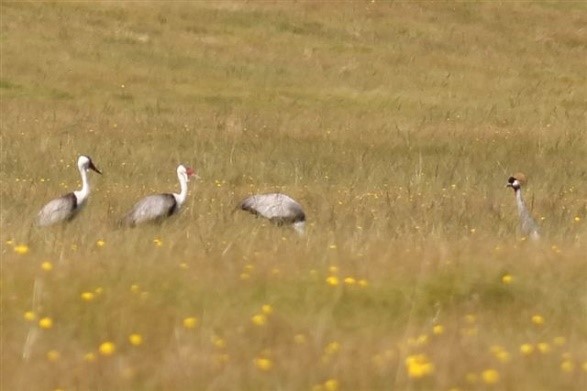 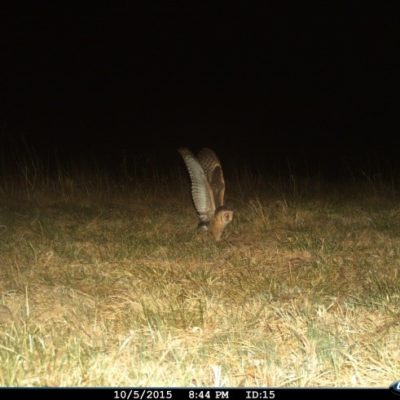 Articles on Dr Swanepoel’s research may be found in our blog archive.